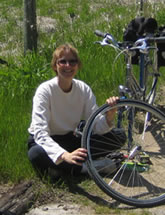 Barbara Whitney is an offsite researcher living in Madison, WI. She obtained her Ph.D. from University of Wisconsin in 1989, then went to Harvard-Smithsonian Center for Astrophysics for 5.5 years, then returned to Madison because her girlfriend lives there. Upon returning to Madison, she tried a variety of different jobs and decided astronomy is much more fun. This new-found perspective made the common worries about career and politics unimportant. She started up a company from which to operate, but that wasn't the perfect solution because she didn't want to learn so many details about administering grants. Fortunately, Mike Wolff told her about SSI, which she joined, and she is very happy with the results. Barbara's research centers mainly around developing computer codes that model spectra and images of a variety of objects, from star formation regions to Mars. Lately she has been busy with the GLIMPSE project (Galactic Legacy Infrared Midplane Survey Extraordinaire), and the SAGE survey of the Large Magellanic Clouds, both Spitzer Space Telescope legacy programs. Barbara enjoys flying airplanes, riding bicycles, and cooking. She has often remarked that she is more likely to be injured on her bicycle than in her airplane. Having crashed both in the last 15 months, her predictions proved correct. Her airplane is repaired and good as new, but she can't fly it to this year's Space Jam because of her recent bicycle accident. Perhaps she should just stick to cooking.